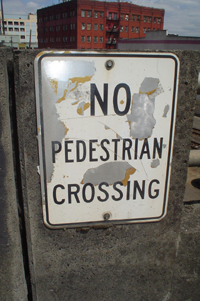 Here’s the starting gate for the trip, the foot of the bridge looking West from the corner of Grand and Morrison. Note the narrow width of the sidewalk; I measured it this evening, and it’s only five feet wide. That sounds like plenty of space, but keep in mind that most sidewalks around the neighborhood are twelve feet wide. Five feet doesn’t allow for much passing room between pedestrians. 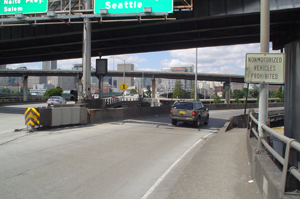 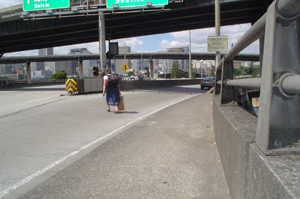 The true bane of this bridge are the two pedestrian underpasses that bypass, respectively, an on-ramp and off-ramp, both of which are attached to I-5. Most people, like the older woman pictured in the lower photograph, choose to simply walk across the on-ramp rather than deal with the underpass. 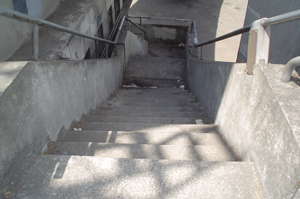 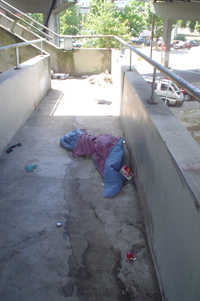 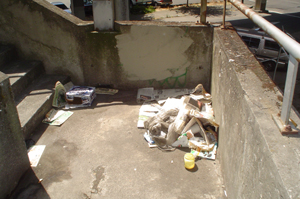 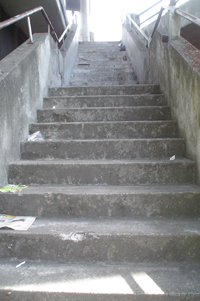 There’s a good reason why people like to avoid the underpasses, especially this one. In the first of these pictures, the one looking down the stairwell, I was getting wafting breezes of stale urine steadily coming up at me. Once you’re down there, the smell’s pretty over-powering. To-day the bottom was empty, but it’s not uncommon to find a few bums drinking down here. I once made the unfortunate choice of walking down into this underpass at night and stumbled onto a rather hostile bum encampment.  Um, as you can see, it’s not very well-maintained. 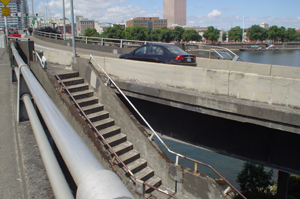 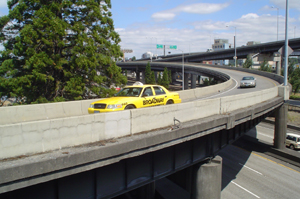 After crossing the first underpass and walking the equivalent of two and a half blocks, you reach the second underpass. In the first picture, if you look past the car, you can see the guardrail, and might even be able to make out the handrail on the opposite side of the underpass. The distance to cross the off-ramp is much shorter than the on-ramp, with less physical barriers in place to stop you from doing it. The only problem is that most of the cars coming off the 5 (as shown in the second photograph) are still doing around fifty miles an hour. It’s worth noting that no one drives the posted 35 mph speed limit on the Morrison. I think that 45 to 50 is a bit more the norm. 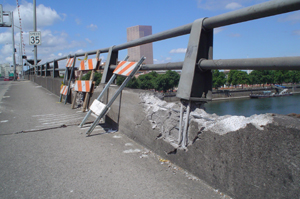 I’m not going to play it up as if it’s a common occurence, but pedestrians get killed on this bridge (it’s that combo of narrow sidewalks and high automobile speeds). The last death I specifically remember was when a car hopped the sidewalk and took out a guy walking his dog. And then of course there was the woman who famously sailed her SUV off the side of the bridge while she was talking on her cell phone and swerving on the metal drawbridge grating in rainy weather. Anyway, the above picture is from a fairly recent accident. I’m not sure what happened, but this photo does not do justice to the amount of damage caused here. I could have gotten a better photo, but I would have had to step out into traffic. 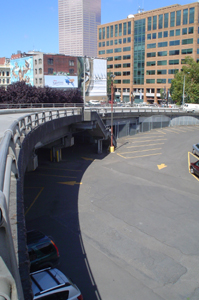 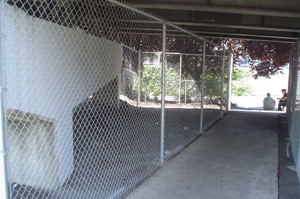 Anyway, here we are coming to the end of the bridge. That stairwell in the first picture leads to the sketchy chain-link tunnel in the second picture. The chain-link tunnel is actually a huge improvement, because that area used to be another camping spot for homeless people. Now, please don’t get me wrong about bums: I am not some PDC-style bizniz man who hates the homeless when I say this sort of thing. I’m talking about home to troll-under-the-bridge, been-drinkin’-and-fightin’-since-10am, scary, surly bums. I walk around at night all over town and see street people of all types, but these guys always gave me the heebie-jeebies, especially since it was in such a concealed location. Anyway, now the only thing around here at night are hordes of rats. 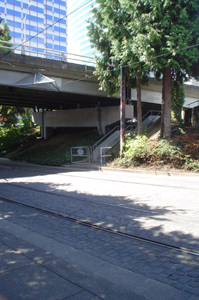 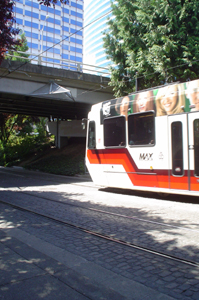 Oh, but wait! You’re not done yet! The chain-link tunnel dumps you out into this weird little depression that should be First Avenue, but is actually just home to MAX tracks. Like they say, the MAX don’t stop for but nobody, so look both ways. After crossing the MAX tracks, climbing a small flight of stairs, and then walking for a block where a two foot ledge theoretically functions as a sidewalk, you’ve finally made it to Second Avenue! I’ve timed my walks from Grand to Second on the Burnside and on the Morrison; the average times are six minutes versus fifteen minutes.

In closing, this route would make for a very good do-or-die foot race. We could call it something awesome like Death Match 5000, and all the survivors at the end of the race would get trophies.