Now that I work downtown again, I get to see a greater variety of weird things. Most of the “weird things” are actually weird people, like the “People aren’t as friendly as they used to be” homeless woman that’s eighty-sixed from Valentine’s for stealing a book, or the white Street Roots-peddling rastafarian wanna-be. I don’t have the courage or the callousness to snap photos of these people and post them on here, but I am camera-equipped for whenever I find weird objects. Like this: 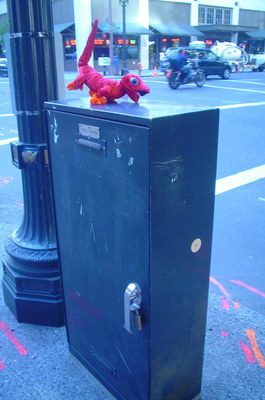 It’s a stuffed toy sitting on top of an electric utility box. That in itself doesn’t seem to strange, but considering this was the third instance of spotting a stuffed animal sitting on top of one these boxes during my walk, I thought it was weird. There’s a lot of different kinds of utility boxes in town, but the stuffed animals are apparently only interested in attacking these kind, which I think are related to traffic lights.

I saw Gus Van Sant having drinks at Huber’s. He’s weird people. I didn’t take a photo of him. I’ve got to say, it definitely seemed like a good afternoon for drinks in front of Huber’s.

When I was getting up onto the Burnside Bridge, I noticed this bumpersticker on a van. It’s from a place called Matt’s in Minneapolis. That slogan there says “Fear the Cheese!” which is in reference to their specialty, the Juicy Lucy. The Juicy Lucy is a cheeseburger, except that the burger meat is packed around the cheese, meaning that when your burger comes to the table, it’s full of molten cheese. The waitstaff will warn you to let it cool down for a bit before you eat it, because you will otherwise severely burn your mouth. Unfortunately, I was a vegetarian at the time I visited Matt’s, so I can’t say that I’ve ever had a Juicy Lucy. It’s a great place, though, and if you’re ever in Minneapolis, you should definitely check it out.