The next few months will be your last chance to visit the Virginia Cafe, Rice Junkies, or the fabulously out-dated Zell’s department store. The entire block is slated for demolition within a few months, and will soon give rise to a 30+ story high rise. So much for seventy years of history, and a Park Block that never manifested itself.

On my way home from work on Sunday, I notived the Vintage Trolley coming down the MAX lines, and decided to catch it to its terminus over at Lloyd Center.  I like the trolley a lot; I enjoy its rumble, the big windows, the comfy seats, and most of all, the trolley conductor that points out interesting facts along the ride. The trolley conductor is kind of a Portland booster, extolling all of the things that make our city great, and dispensing interesting historical anecdotes. On this particular ride, however, the conductor talked aboutsomething that didn’t quite sit right with me.

As we were coming to the dip in the tracks that go underneath the Morrison Bridge, the conductor started talking about how that was the original location that Pettygrove and Lovejoy started clearing out for the future town. Okay, sounds about right. Next, he started talking about how that little dip was the original elevation of the land, and that due to flooding, they did infill all around the area. The original elevation bit seemed plausible, but what about this infill? He then went on to say that they did this around the time the seawall was built in 1929, and that in doing so, they buried the first floor of all of the original buildings, so that all of the ground floors that we were seeing were actually the second floors. Uh… HUH? That’s the first time I ever heard anything like that. Upon hearing this, I was surprised and skeptical, but didn’t outright disbelieve it – I’ve only lived in town for seven years, so there’s plenty about the history of the city that I don’t know. I was mulling this over, wondering if I’d heard him correctly, when we started passing the New Market Theater. At this point, he now tells everyone on the trolley that the floor of the New Market that we are seeing as the ground floor is actually the second floor because of this burying business. What?

The more I thought of all of this, the more it bothered me. For starters, all of the ground floor architecture looks like ground floor architecture. Second, if there was just one point in downtown that wasn’t filled, why was it conveniently done where the MAX would one day run underneath the Morrison Bridge? Third, where did this guy get this information? If anyone has some knowledge of this supposed “infill”, could they let me know? This whole thing sounds pretty fishy to me.

Anyway, aside from this, the conductor seemed like a really nice gentleman. I don’t know if I want to ride on the Vintage Trolley with him again.

Finally! And it only took us, like, fourteen tries! 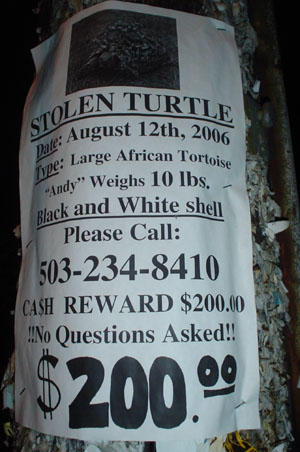