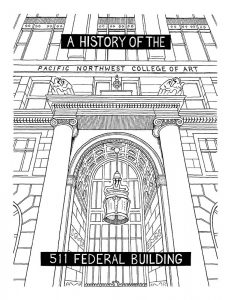 In my short comic, “A History of the 511 Federal Building”, I explored the story of the building that is now home to PNCA. In researching the comic, I relied heavily on the Oregonian newspaper archives, which can be found at the Multnomah County Library’s website. What follows is a list of articles I used in writing the comic, along with notes about things that didn’t make it into the finished work.

The growth of the post office had already caused the Federal Building (now called Pioneer Courthouse) to add a wing in 1903 (see “WILL ADD A WING – Extension of Portland Postoffice”, Oregonian, November 29, 1902). After only six years, the Postmaster had decided that it needed to move to an entirely new building.

“YOUNG AFTER DATA – Will Show Portland’s Need For New Postoffice”, Oregonian, June 16, 1909. Postmaster John C. Young works with Senator Jonathan Bourne to propose a $2,000,000 appropriation to the federal government in order to build a new post office building. While Bourne was campaigning for office, Young was his secretary and “right-hand man”, and the position of Postmaster was a political appointment. Young died of stomach cancer in 1910.

“DECISION NOW SOUGHT – DELAY IN CHOOSING SITE FOR POSTOFFICE VEXATIOUS.”, Oregonian, August 20, 1910. This article also introduces the idea that Block R, bounded by Glisan, Hoyt, Sixth & Broadway, will be the site of a future post office building. Block R would continue to be looked at as a key candidate for the future building before Block S was ultimately chosen.

“If other cities have pneumatic tubes connecting union depots with the postoffice, why not Portland? Don’t we contribute our fair share of profit on postal business? Is there another place of Portland’s size that does more to stop the annual deficit?” – Editorial page, Oregonian, August 21st, 1910.

I couldn’t find any photos of what Block S looked like, so I found the block on the 1908 Sanborn Fire Insurance maps (a really awesome resource for detailed old maps of Portland. You can access them from the Library’s website here). The buildings in the panel were drawn to match the descriptions given of the different structures on the Sanborn map. You can see that there wasn’t much on the block around the time it was purchased: a shed, a scrap iron storage yard, and a two-story building housing a junk shop.

“M’VEIGH NAMES POSTOFFICE SITE – Block S to Be Condemned as Price Asked is Considered Too High.”, Oregonian, January 13, 1911. The block was first offered for sale at $340,000, then the price was lowered to $325,000, then the government decided to attempt to condemn the block in order to purchase it for a lower price. Eventually, the government would lose this case, and a jury would value the block at the original full price.

One strange element of the site selection for the building was that there were two separate, competing selection processes – one conducted by Special Agent J. W. Hill of the Treasury department, who was a personal friend of then-President Taft, and one led by Postmaster Merrick (Postmaster Young’s predecessor) and “City Beautiful” Civic Architect Edward Bennett. Hill spent over three months in Portland (usual site selections took a week or two), collecting a per diem, and refused to disclose the site he selected. When his site was revealed, it was the block bounded by W Burnside, Couch, Eleventh and Twelfth – the site that the Weinhard Brewery sat on. The price of that block was $500,000, which happened to be the maximum amount that had been appropriated by Congress for the site purchase.

“QUICK ACTION DESIRED – OPTIONS ON PROPOSED POSTOFFICE SITES SOON OUT.”, Oregonian, October 4, 1910. This article includes one of the mentions of the planned replacement for Union Station that was never built. At the time this planning was being done, Union Station was less than 20 years old.

These old white men aren’t modeled off of anyone in particular. Well, I did kind of think of Steve Buscemi while I was drawing the one on the right side of the panel.